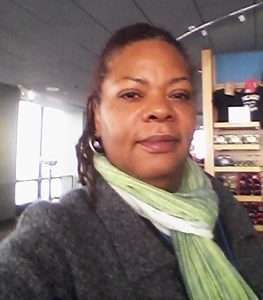 For Black History Month, HealthConnect One is partnering with Reaching Our Sisters Everywhere (ROSE), MomsRising, and the National Association of Professional and Peer Lactation Supporters of Color (NAPPLSC) to celebrate the work of people, organizations and institutions who make a positive impact on breastfeeding in African-American communities.

This is the second guest post in our Black History Month blog series.

by Gaylean Woods, Former Board Member, HealthConnect One

My commitment to breastfeeding started as a young mother. I believe it is the best start we can give our babies.

My first child was not breastfed because of a myth that my husband had. He believed that the breasts were not meant for that purpose because it was an old fashioned concept. He also believed that the breasts were a means of pleasure. I, on the other hand, did not see things the same way. I relented to his wishes not to breastfeed, but vowed that any children that I had after the first would be breastfed.

All of my other children were breastfeed for at least 2 years.

I didn’t know about the value of mother’s milk, the values of colostrum and the antibodies it provided early in life. I didn’t know about the bonding effect it had for me and my babies. The only things I knew were that I didn’t have to get up in the middle of the night to warm a bottle, I didn’t have to carry powder and bottles every time I left the house, I didn’t need a stove, microwave, or hot water. By breastfeeding, I just wanted to defy my husband and prove a point. I quickly realized that I had everything I needed and those were the perks.

Most people frowned or ran away, some even argued about how unsophisticated or even illegal it was to breastfeed in public. I wasn’t deterred, but became an advocate to support other women who wanted to breastfeed and faced similar challenges. As my children grew, I used my commitment to become a breastfeeding advocate every chance I got. Teaching, supporting, and speaking out about the value of breastfeeding for both mother and baby, often using whichever child was still breastfeeding at the time as a demonstration model.

I would like to see more support and advocacy in the African American community for women who want to breastfeed. Young women in our community today still see it as an old fashioned concept that modern women don’t do. The breast is still sexualized and considered only useful for one thing.

Although my children are all grown, when I see a woman who is pregnant and trying to decide if breastfeeding is something she should do, I encourage her and talk to her about the value of it, her fears and feelings, the challenges, and her supports. I often hold up my children as an example of breastfeeding success. I challenge women to defy the myths, and encourage them to advocate for breastfeeding every time they can.

I have made a lifelong commitment to HealthConnect One and its mission, as well as any other organization that supports breastfeeding. HealthConnect One is a great local resource and provides support to all women, whether they breastfeed a few days or a few years. The work that they do daily to promote breastfeeding and to support women throughout their journey is inspiring.

The take-away from this for readers should be that breastfeeding is no longer in the past. It is a wonderful start to a new life and has many perks. Women face many challenges in life but breastfeeding isn’t one of them. It is healthy and natural. It helps to create a bond between mother and baby that is lasting and loving, that continues to exist between them throughout their lives.

Gaylean Woods holds both a Master of Arts degree in Communications and a Bachelor of Social Work degree from Governor State University, and is currently working as a Care Coordinator for Cenpatico Behavioral Health. A motivated leader, she is extremely passionate about her work and has a rare, unwavering dedication to community health issues and causes.

Gaylean Woods is also the founder and President of Woods Consulting. She is a strong advocate for raising awareness and supporting training, education and community based programs to prevent violence against women and children, and has received numerous awards and recognition for her commitment to community service. She consistently demonstrates her passion for the health and wellbeing of mothers, babies, and teens through volunteerism, and has affiliations with the NASW Committee on Community Violence, National Coalition Against Sexual Assault, Illinois Coalition Against Sexual Assault, AIDS Foundation of Chicago, and the HealthConnect One Board of Directors.

Gaylean Woods has a positive mental attitude and is a source of encouragement for those around. She has a willingness to speak out and is unafraid to get in the trenches to help fight for solutions that will improve the quality of life of others.

Now we want to hear from you!