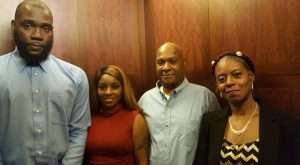 Editor’s Note: Loretha is such an inspiration to everyone she meets in her journey as a community based doula. Her knowledge and strength has continued to help women around the world since her start in community based doula work nearly twenty-two years ago. HealthConnect One extends our deepest gratitude and congratulations to Loretha on receiving the 2018 Durbin CHW of the Year Award.

Loretha Weisinger’s story as told by herself.

I became community-based doula in 1995. There were a lot of different things that inspired me to become a community-based doula, but the main thing was I was here at the Marillac and I was volunteering. I volunteered here for ten years. They were continuously asking me what it is that I wanted to do for my future, and I wasn’t coming up with anything. They would bring different ideas to me like culinary arts. Once I graduated from that, I was about to be a chef, and then the opportunity came along to be a doula. I became involved in the Marillac house because I was taking some assistance with finances , and I heard of a place that was doing a lot of different things for people, making a difference in their life, so I wanted to be involved in that.

I was halfway through classes when I went on a birth, and it was too soon before I knew what I was supposed to know. I didn’t know how a baby looked when it was being pushed out or what the body had to go through so all of that was traumatizing to me.

When I came to class and told them about the birth everybody was putting their arms around me and holding me like a baby and telling me everything is going to be okay and it was normal. I was like the guinea pig to them because they were hiring different people and they were quitting because there wasn’t any money in it. I just said that no matter how hard it is, let me just try to stick with this.

I am now a prenatal educator, meaning I teach the young ladies how to go through the pregnancy by first starting off with healthy eating, moving around during the pregnancy and keeping fit. We have nurses from U of I that come help us with breastfeeding, and we went from a 3% breastfeeding initiation rate to now about 70%-80%. A lot of these things help the mom get a visualization of what is expected, what they’re supposed to be doing, what is not acceptable and all that.

Many people have inspired me. Rachel and I went to Japan together to talk and educate women there about becoming doulas, Wandy held my hand and took me to classes in different cities to teach and learn different things. Gerrie McKinley oh my gosh, she would put her hand on my shoulder just to tell me that I don’t need to be stressed.

Community health work has impacted my life in such a way that it’s helped me to think about a lot of different things that people are going through and how grateful I am for what I do have. The sky’s the limit, well really there is no limit rather. Just the mere fact that I’m able to help nurture and help the moms bring life into this world and how their faces are glowing when they see their babies. And involving the dads. Since that’s a really big thing of mine, involving dads in the programs.

Moments that really stand out to me are when moms and babies are running around and they talk to me and tell me they love me. I feel like a super doula because I helped them through their pregnancy, delivery and postpartum. I have the opportunity to be trusted enough that some of the young ladies that are still around who have their children in daycare ask me to pick up their babies and everything. You know, that is love. I am so grateful for what I do.