On Being a New Mom 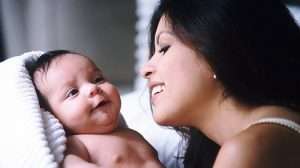 My pregnancy and child birth was not what I had planned. By week 28, I was hospitalized with preeclampsia (a pregnancy complication characterized by high blood pressure and signs of damage to another organ system, most often the liver and kidneys) and by week 31 1/2 my doctors advised that my labor should be induced to reduce the risk for me and my infant. After 32 unsuccessful hours of labor, I was told I needed  a cesarean section. My daughter was born at 32 weeks at 4 lbs 11 oz and spent the next two weeks in the NICU. But that is not the story I want to tell. I want to share with you what happened months later when my baby girl was thriving, breastfeeding, growing and healthy. I found myself in a nightly panic that I could neither explain nor control.

I want to share my story to raise awareness about Postpartum Depression. I thought I understood what postpartum depression was. I had read articles, flipped through books, and talked to family and friends. What I didn’t know and would later learn is that postpartum depression (PPD) effects 1 in 5 women and some clinicians believe that number is much higher – making PPD the most common medical complication among new mothers. For Latinas, the rate seems to be closer to 1 in 3 new moms. What I also failed to understand is that PPD is not just the cases that we hear about on the news about women hurting themselves or their children and that not everyone who suffers PPD will have the “numbness” or zombie feeling as described by some celebrities. For me, my PPD took a more insidious form. It fed on my feelings of inadequacy as a new mom. It manifested itself in many sleepless nights wondering how I would keep my daughter safe from a fire, a home invasion and even a tornado. It meant when I was in the house alone with her I didn’t sleep because I wanted to make sure nothing happened or that some days as I finally got the courage to wrap her up and take her out I would freeze in fear that we might get into a car accident. In my mind, I would play out these scenarios and try to “prepare” in my mind an escape.  None of this preparation was ever enough. I was still rattled by “what ifs” and was always emotionally and physically exhausted from not only tending to a newborn but also the endless hours of worry. While I could sometimes tell myself that my worries were irrational, for months I could not shake these feelings. When I returned to work the anxiety both about my baby’s safety and my own capabilities began to make work a struggle. 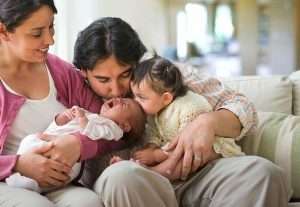 I never told my family or friends the extent of my fears. My husband sensed something was wrong but because I never completely told him what I was thinking he and others just said I “worried too much” or that I was “over protective.” Finally, on a visit to my therapist to discuss work stress, we started to unravel this issue. My doctor suggested that I might have PPD. I assured her I didn’t want to hurt myself or my baby, that I wasn’t crying inconsolably, and that indeed I felt connected to my baby. Why else would I worry so much? Why else would I be so anxious?  We talked about how this anxiety, even four months after the birth of my baby was indeed postpartum depression. At first I felt guilty about having PPD. I felt that I should be happy – my baby was healthy. What else did I want?  Why couldn’t I just shake this off? There was even a small part of me that felt by calling it PPD, I was just trying to find an excuse for not being able to cut it as a new mom. I am lucky because I got help that allowed me to curb my anxiety, which allowed for me to be more fully present for my family. It allowed me to spend time with my daughter and not always be on edge and to be able to enjoy being a mother instead of always being over anxious.

My story is just one story, but as we begin to share our stories, we learn that we are not alone. We learn to support one another and to find help for ourselves and our families. So, share your stories, ask for help and support one another. You are not alone and it is not your fault. As Latinas, we are often misdiagnosed, under diagnosed or ignored. Sometimes our cultural norms press upon us that “sacrificing” of ourselves and forgoing happiness is a mother’s duty. We mistake the signs of PPD for our role as mother, but a healthy mother is vital for a healthy family and her mental health is critical for not only her long-term health, but the health and happiness of her baby.

Partners to Parents – tips for couples for pregnancy and newborns

Thank you to Diana and to Urban Strategies for sharing your story as part of our 2017 Latino/Hispanic Heritage Month Series, “Reclaiming our Traditions on Breastfeeding and Birth / Reclamando Nuestras Tradiciones Sobre La Lactancia y El Parto.”

Urban Strategies understands that mothers are central to the Latino family. A mother’s health, including her mental health, can affect all aspects of family functioning. Postpartum depression is not uncommon and can be negative for the mother, her child and the entire family. Untreated depression can lead to negative effects for the child such as difficulty forming emotional attachment, difficulty with emotional regulation and, in later years, risk of depression, anxiety and difficulty with school. Latinas are at risk for untreated depression during and after pregnancy due to issues of social stigma, language barriers and/or cultural beliefs that may prevent mothers with depression from identifying symptoms or seeking help.

Recognizing that Latino cultural practices and beliefs may also provide potential protective factors that support mothers, children and families, Urban Strategies has partnered with the University of Houston’s Center for Latina Maternal & Family Health Research, to sponsor the Culturally Responsive Intervention to Improve Maternal and Child Wellbeing Project.  By better understanding which cultural beliefs and practices provide protective factors as well as adapting an existing intervention for postpartum depression to be culturally responsive to U.S. Latinas, we can build stronger communities.